My name is Sigurjón Ólafsson. I have been working in web management, PR and communications since 1997. Today I work as a division manager of service and development in Hafnarfjörður, the the third largest Icelandic municipality.

For six years, 2013-2019, I ran my own business as an independent web consultant – Fúnksjón. I was an adjunct lecturer in web communication at the University of Iceland in 2011-2019.

Since 2011 I have published articles (in Icelandic) on this website about web development, web design, intranets, usability, information architecture, writing for the web, content strategy, web management and related subjects.

In 2015 my book: Bókin um vefinn (The Book About the Web) was published. This is a manual for web managers and mostly based on my blog.

In August 2013 I started my own business as an independent web consultant – Fúnksjón web consultancy – after 16 years in web management.

I am a part-time lecturer in web management in School of Humanities at the University of Iceland and teaches courses in the Continuing Education at the same university.

I am a proud ambassador for Iceland for EuroIA, European Information Architects.

Companies I have worked for include Íslandsbanki, University of Iceland, Kaupthing Bank, PricewaterhouseCoopers and the Icelandic Maritime Institution.

During the Kaupthing years the bank’s corporate website was ranked the best bank website in Sweden in 2007 and the best Icelandic corporate website in 2006 and 2007 according to the international KWD Webranking. My team also gained recognition for delivering one of the 10 world’s best intranets, according to the report of Nielsen Norman Group in 2009.

I have held number of talks at conferences and seminars in Iceland over the years. I have also participated in conferences in Scotland, Sweden, Faroe Islands and Denmark.

My five minutes lightning talk I gave at EuroIA in Edinburgh on 27 September 2013. It’s about the link I have found between Buddhism and user experience or broadly speaking the management of websites. If interested check my notes as well.

Buddhism and User Experience. It’s not about religion from Sigurjon Olafsson

In my 15 years (+1) in web management I have found 15 things I am certain about for websites and intranets. In this presentation I address those 15 things, including web management, user experience, information architecture, content cleanliness, words, design, function, aesthetics and more.

I got the idea for the Content Man during a regular visit in one of Reykjavík’s swimming pools. I thought there was a need for some kind of reminder for web managers to keep content clean, just as important as keeping the pool clean. In all Icelandic pools there is a similar poster reminding visitors about washing before entering the pool. 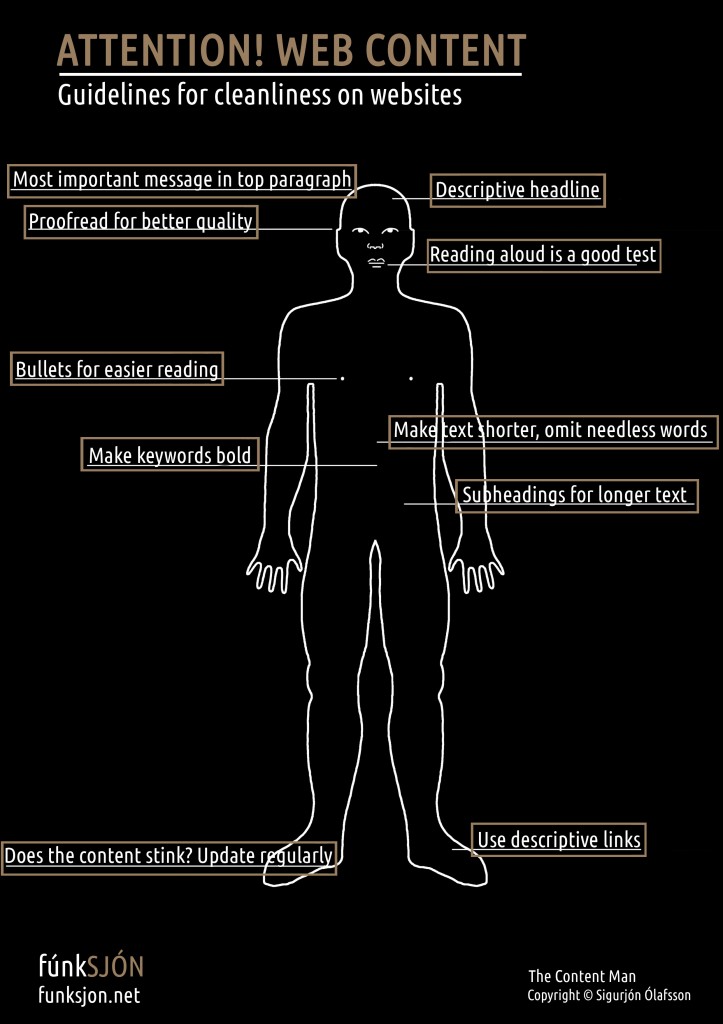